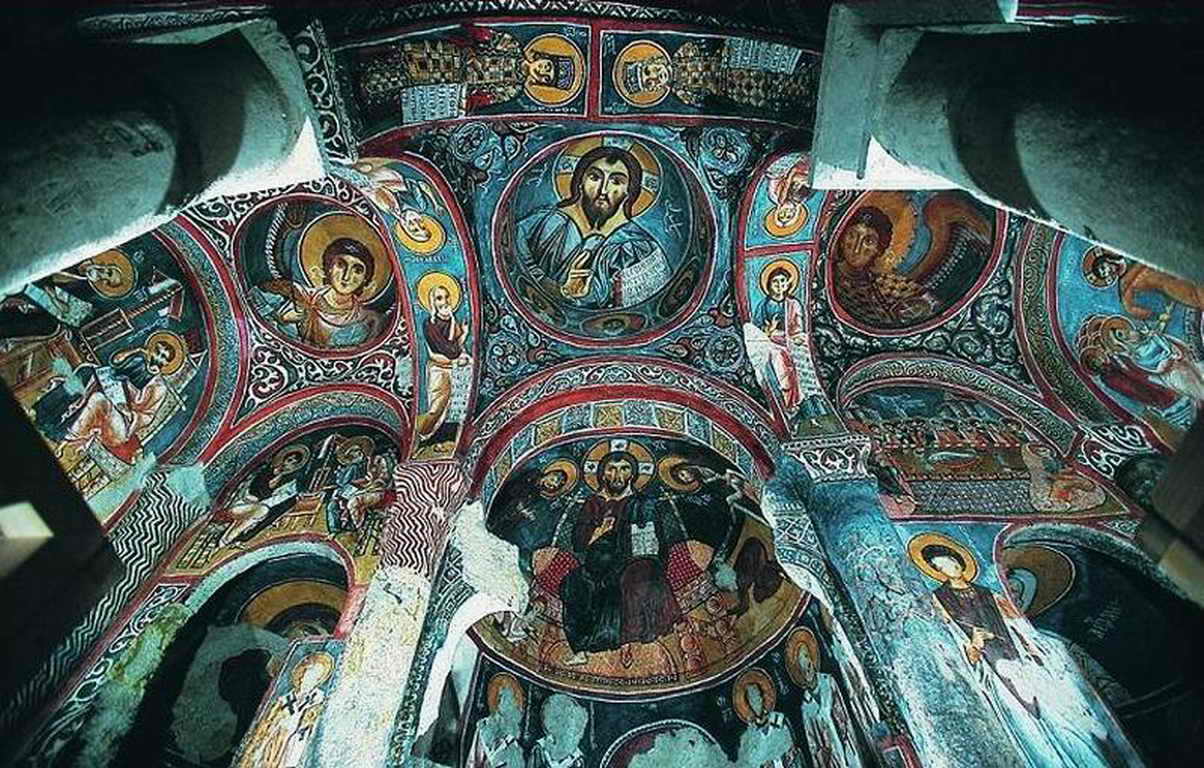 11:45 AM Saint George of Cappadocia

The region of Cappadocia, a haven for persecuted Christians and carved churches, was the birthplace of several saints, but none as famous as Saint George, from the second half of the third century; martyr of Christianity, a miracle maker and martyred for his faith.

Son of Christians, St. George at early age served in the Roman army under Emperor Diocletian and was praised many times for his excellent service to the Empire. But soon appeared religious repression, for which the emperor summoned his top aides and made them engage in paganism. They all did, except for Saint George, who, according to history, stood in the middle of the room and confessed his devotion to Christianity, which cost him jail and continuous torture. It is said that the emperor himself subjected him to cruel tortures, asking the saint to sacrifice his beliefs for his life, but he was adamant and confessed to be willing to die for Christ, as his father did when he was little. After this reaffirmation of his faith, the story says that God spoke to him: “Do not fear, George, I’m with you” and since then, to no avail were tortures, or the sprocket, or the iron sandals or the water and lime well. Saint George unscathed from physical damage and surrounded by a sort of angelic aura.

In demand of one last big test of the existence of his God, Magnentios, one of the advisers of the Emperor, ordered him to perform a miracle. They passed near an ancient tomb and the Roman asked the Holy to resurrect the person buried there. After praying for a long time, the stone rolled away from and a man arose. The emperor asked him who he was and he said he had lived many years before Christ, but being an idolater, after his death he had being burning in the fires of hell for that long. According to the stories of St. George, after this great miracle many idolaters and pagans were converted to Christianity, including Athanasius, a famous magician, or the wife of the emperor. But nothing prevented that St. George was beheaded soon after.

Known for his miracles and great deeds to help people, there is a famous legend about St. George and a dragon. It is said that this dragon had threatened the idolaters of Athaliah, so that the inhabitants had been held behind the walls, leaving their homes, fields and crops and each year sacrificing a girl to appease the monster. When St. George came to this area, the king’s daughter was about to be sacrificed. After subjecting the dragon, St. George put a rope around his neck and handed it to the princess, who drove the beast back to the city, where many were baptized and converted to Christianity.

It is believed that this myth came from the Saint own icon, that represents the Equestrian murder of a fearsome dragon with a princess in the background. The first image-makers of St. George might have tried to show Satan as the dragon, and St. George overcoming evil, although other interpretations suggest that the figure of the dragon refers to the emperor Diocletian and the princess to his wife Alexandra, converted to Christianity after witnessed the miracles of St. George.

When the Crusaders traveled through the Byzantine Empire, they found this icon and from it recreated the legend. In fact, it is thought that this holy icon is miraculous itself, so St. George fame was spread throughout the East and the Crusaders devotion to the Saint was brought to Europe. Thus, St. George of Cappadocia, recreated in several of the frescoes of the caved churches of this magical region, became the patron of countries like England, Syria and Lebanon, among others, and is venerated by Anglican, Orthodox and Muslims.